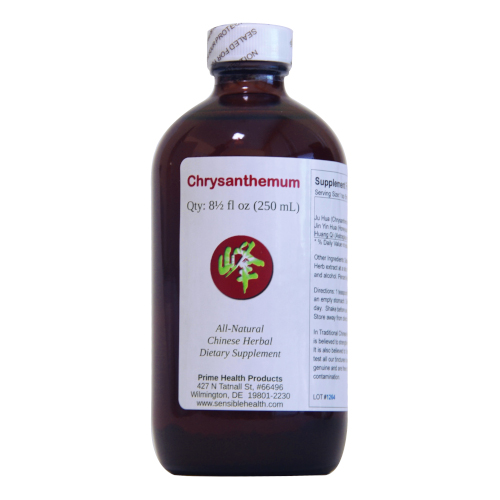 Chrysanthemum is a flowering plant which is native to Asia and Northeastern Europe, and its greatest diversity can be found in China. The Chrysanthemum flower is often made into tea in China, where it is used as a folk remedy for colds and flus. In traditional medicine, chrysanthemum is said to strengthen the lungs and immune system, as well as clear heat from the eyes. We lab-test our tinctures to ensure the ingredients are genuine, free of pesticides or heavy-metal contamination.

The Chrysanthemum flower is also known as Ju Hua. It has been made into a summertime tea in China for generations, and in traditional Chinese medicine, it is believed to “dispel heat” in the liver and gallbladder, “lighten the body”, and fight aging[1].

The Thoroughly Revised Materia Medica elaborates on the properties of Chrysanthemum thusly:

Sweet chrysanthemum flower is sweet, bitter, and slightly cold. Thoroughly imbued with the qi of the four seasons, it sprouts in winter, produces leaves in spring, blossoms in summer, and reaches full flower in autumn. In its fullness, it embraces the frost and succumbs to the essence of metal and water, thus it is able to benefit the two organs, the Lungs and Kidneys.

Thus, it can nourish the eyes and the blood.

Honeysuckle is also known as Lonicera Flower, Flos Lonicerae, or Jin Yin Hua. In Traditional Chinese Medicine, this herb is believed to have anti-bacterial and anti-viral properties. Therefore, honeysuckle tea has long been used as a folk remedy in China for cold, flus, and fevers.

Astragalus is also known as Mongolian Milkvetch Root, Astragalus Membranaceus, Radix Astragali, or Huang Qi. In Traditional Chinese Medicine, this herb is believed to stimulate the immune system and increase metabolic rate. In laboratory experiments, it increased white blood cell and leukocyte counts in mice. n China, this herb is often used as an ingredient in soup to increase strength and energy, and ward off colds and flus.

1 tablespoonful (5 mL), up to 3 times daily, on an empty stomach. Drink plenty of fluids throughout the day. Shake before use.

Store away from direct sunlight or heat. Keep out of reach of children.

Use with caution if pregnant, particularly during third trimester, as astragalus can have diuretic effects.

Ingredients are subject to change at the manufacturer's discretion. For the most complete and up to date list of ingredients, refer to product packaging.

Disclaimer: these statements have not been evaluated by Health Canada. This product is not intended to diagnose, treat, cure, or prevent any disease.